Ex Muslims of North America just debuted their first billboard showcasing openly ex-Muslim Americans. This is very exciting! I love how we are opening up the dialogue and demanding space. I am so proud of this hashtag #AwesomeWithoutAllah. I am grateful that people are dissenting openly and proudly in spite of the risks of honor-based violence, ostracization, and financial repercussions. 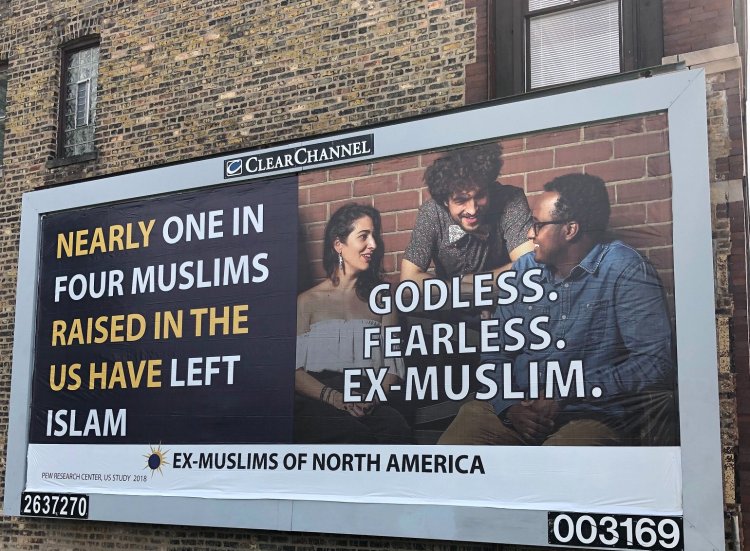 I left Isam as soon as I was financially able to support myself without my family’s help. Now, I have absolute control over my financial, economic, legal and reproductive decision-making power. I don’t think I was really ever a Muslim. I will never accept that my testimony is worth half of a man’s because I am “deficient” in intellect and piety. First of all, I am a RADICAL feminist. I believe in the liberation of women, LGBTQIA, and gender non-conforming folks. I chose feminism over Islam knowing this could get me killed. That’s how dedicated I am to feminism!

No more being forced to wear ugly jilbaab. The breeze felt sooo good! 😉

Leaving Islam is an egregious act. In 23 Muslim-majority countries, there are dire repercussions for apostasy including death. Why should I be killed because I don’t want to be forced into a faith that allows my husband to beat and rape me? Leaving Islam was an act of liberation and self-respect. I deserve to live a life without violence. I deserve to make choices without fear that my family will honor kill me as they’ve threatened multiple times. By renouncing my faith, I reclaimed my life. Finally, I can travel solo, date whomever my heart desires, make career choices and fight for women’s liberation without the worry of honor killing.

Since launching GabarIskuFilan, I’ve written about solo female travel, reproductive coercion, financial independence, and the Black diaspora. Blogging has enabled me to connect with people around the world who share my values, initiate new discussions and build movements toward our collective liberation. Feminism is fighting for equal pay for equal work, criminalizing marital rape, expanding access to reproductive healthcare and dismantling white supremacist capitalist patriarchy. Feminism restored my dignity after decades of cruelty and abuse. I adore my new life. I am so grateful I was able to escape an honor killing. I should not be killed because I refuse to be Muslim. Nor should anyone else.